I’m really pleased when people tell me they enjoy living with my art. So, at times I’ll post images of my clients and friends with my paintings.

Here’s Diane Collier (AIA) with a painting from my “Emergent Series,” a body of work that explores and captures interesting people and faces that fascinate me. This one is titled “Finding Malcolm Gladwell,” and hangs in her very contemporary townhouse.

Tary Arterburn, landscape architect and co-founder of Studio Outside, and Diane relax together in her living room with “Malcolm G.,” author of Outliers and The Tipping Point, and other recognizable faces like that of William Dafoe and Winston Churchill.

Another work from the “Emergent Series” hangs in the Ernst’s Carrollton home which overlooks a beautiful lake. Warren and Susan stand before “Finding Philip Glass.” Besides composer “Philip G.,” one of the faces I drew in this composition belongs to Henry Lewis Gates, MacArthur Fellow, Professor and Director of the W. E. B. Du Bois Institute for African and African-American Research at Harvard University. Dr. Gates peeks over their shoulders.

And then, there are commercial uses for my paintings. For the first official photo of Jan Blackmon (FAIA), the new Executive Director of the AIA Dallas Chapter, my paintings were used on the set for her photo shoot.

To wrap up today’s post, Gus Hinojosa (AIA), Principle at Hinojosa Architects and Interior Design, commissioned me to create large paintings for a Dallas Bank’s Board Room. When the bank moved their corporate headquarters from North Dallas to Uptown, the CFO hired Gus and his firm to design the new offices. Gus, his team and the bank were all part of the review process, looking at preliminary studies and approving the final concept. In the end, the bank owns original art that was made specifically for this very public space, the executives and their visitors. 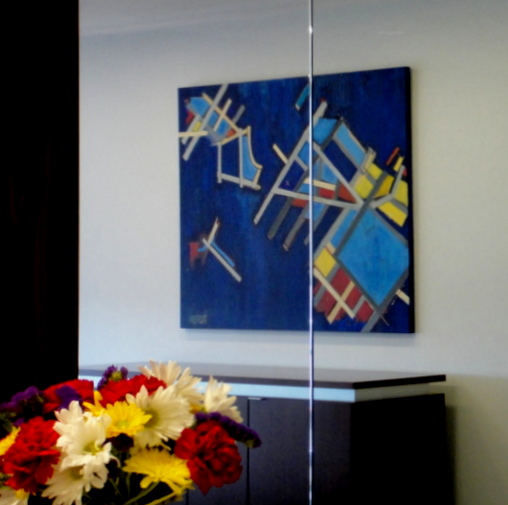 Painting: “Aerial” | acrylic on canvas (2012) | 48” x 60”
One of two paintings in the Board Room at a Dallas Bank’s Corporate Headquarters
Architect: Hinojosa Architecture and Interior Design
(photo: Meg Fitzpatrick)

For those of you who live with my art, please send me JPEG images. I’ll use them in future posts.

I think many of us who are curious by nature continually seek the new and different. You can be in any field and possess an ongoing openness to learning. As an artist, I’m drawn to exploring different styles, media and techniques.

And, last week I was reminded of this.

A colleague from long ago, who had left the business world to pursue her passion in animal rights and equestrian training, contacted me about my animal paintings. I had been known to her for my interpretative pet portraits, having done many on commission. When she went to my redesigned website, the e-gallery now showcases my current body of more abstract work. So, I sent her JPEGs of the paintings with which she was familiar; and was reminded of the versatility seen in my art over the many decades of practice.

For those of you who are not familiar with the animal series, here are some examples: 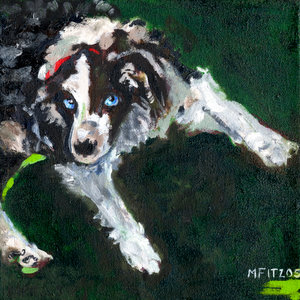 Yesterday at the Dallas International Film Festival, Laura Linney talked about life as an actor. She became animated when she talked about colleagues of “tremendous range.” Those who say “Yes, I can” when given a script that seems against their type. She was not surprised when Paul Giamatti (questioned by some as the right choice) nailed his role in HBO’s John Adams. He was her example of range. Giamatti won both the Emmy and Golden Globe as Lead Actor for this role.

Linney’s point about developing range, to me, is what makes an artist (really any creative person in any field or occupation) stretch, experiment and explore different approaches to their work. And then, when they have been at it long enough with some mastery, they are called versatile which I find a compliment.

Dick Solomon, President of Pace Prints, wanted his New York-based business to make a difference, in a memorable way, when his gallery exhibited at this year’s Dallas Art Fair.

He did so when he offered Greenhill School art students a chance to work side-by-side with the well-known, Texas-born artist, John Alexander, and Justin Israels, one of Pace’s master print makers (see image below).

To start, a faint pencil sketch of a monkey guided John Alexander (above right) and Justin Israels (above left) as they began painting on a thin aluminum plate, which has a rough-toothed surface to better absorb the printer’s ink being applied by John with a brush (see image below). 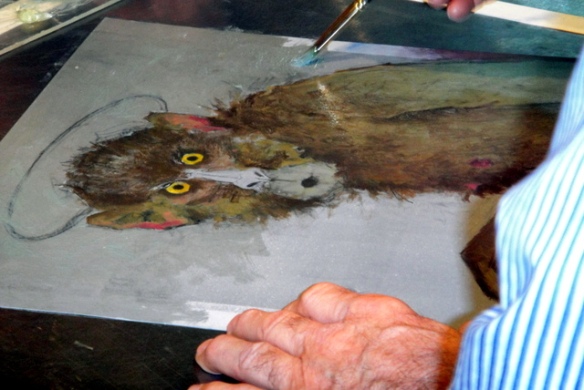 The painted metal plate and a wet paper were pulled using a press, lent by UNT’s College of Visual Arts and Design, to print the painting. Here’s an incredible tidbit – the pressure was 600 tons per square inch (see image below).

The method of making monoprints means that no two prints are alike. It’s the most painterly of all the printmaking techniques; it is essentially a printed painting.

With each technical step, John and Justin bantered with the wide-eyed Greenhill students. Here are some of the comments I found interesting:

“Being an artist is a lonely job.” John came to print making a decade after he was established as a painter. He welcomed the printing process because he liked working with another human being. Justin and he sometimes break into a dance with a James Brown song blaring in the studio. Legend has it, according to John, that deKooning played a TV in his studio as a substitute companion to ease the silence.

“Draw from life.” He recommended that the budding Greenhill artists go the Museum of Nature and Science and sketch the stuffed animals. He still visits zoos and museums to carefully observe the anatomies of flora and fauna and replenish his mental data bank of visuals.

“Give the monkey (any animal) a personality.” John imbues his animals with spunk. Some of his friends have commented that the creatures bear a resemblance to John, specifically his eyes. 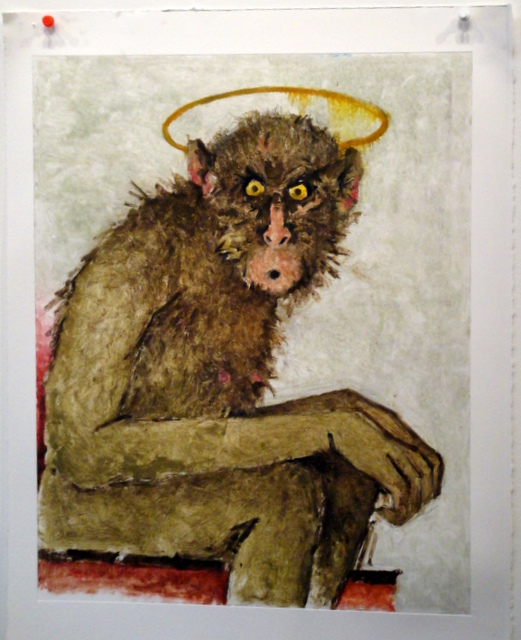 “Sitting on the Throne,” the final piece of art, is to be sold with a portion of the proceeds benefitting Greenhill School to further fund the kids’ education.

Pay it forward…with this Art Fair twist, everyone wins

(PS: You can have a John Alexander creation in your freezer. With business partner, Dan Aykryod (of Saturday Night and House of Blues fame), John designed the skull bottle for Crystal Head Vodka. The legend of the 13 skulls, referenced by Indiana Jones in the movie franchise, was the inspiration for this concept.) 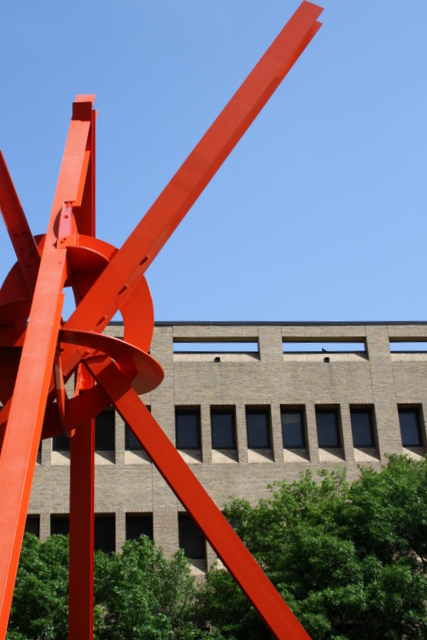 On a sunny Saturday, a group from the Nasher Sculpture Center’s Avant-Garde Society gathered in an Austin hotel lobby, Starbucks coffee cups in hand, eager to start a day full of learning more about art.

As with most field trips, we boarded a bus and turned our attention to Nasher’s Curator Jed Morse who began explaining the significance of our first stop – University of Texas Austin. (Note: Jed is proud UT Longhorn alum.)

His story was interesting.

New York City’s Metropolitan Museum of Art has more art than they can possibly exhibit. Much is warehoused and rarely, if ever, viewed. This “embarrassment of riches” isn’t unusual for a major museum. However, what is unusual and quite clever are the partnerships the Met is forming nationwide to make their stored sculpture and art accessible to the public.

UT Austin was among the first “experiments” between the Met and a satellite location where a large quantity of sculptures (28 in total) were loaned on a long-term basis. This gesture boosted the UT administration’s and faculties’ vision of implementing “Landmarks,” a campus-wide public arts program which has proved to be a success. Plus, as the university continues construction and renovation, a percent-for-art policy has been approved whereby 1% to 2% of the budgets for building projects will go toward acquisitions of art. According to The New York Times, the campus is “poised to be a destination for modern art.”

Jed walked us through the grounds and buildings giving us highlights. On view were sculptures by well-known artists, including Mark DiSuvero (see photo above). DiSuvero has said his large-scale sculptures are really “drawings in space.” Instead of charcoal and paper, he uses steel I-beams, industrial materials, a crane and space. Favored by Dallas collectors, we have easy access to more of these bright red structures back home in the Dallas Museum of Art’s Ross Avenue Courtyard, the Meyerson Symphony Hall and NorthPark Center.

On tours such as this one, my friends and I play the game, “If you could bring one piece home, which one would you pick?”

From the UT Landmarks collection, my choice was the Ursula von Rydingsvard sculpture, Seven Mountains (see photo below). It was made by gluing and doweling four-by-four inch lumber beams, the most ordinary of materials. Next, Ursula hand chiseled the surface until it became craggy and ancient, as if Mother Nature had eroded the forms into stone cairns over eons of time. Then, graphite powder was rubbed into the surface and burnished with steel wool pads until a silvery gray sheen developed. Simply gorgerous. 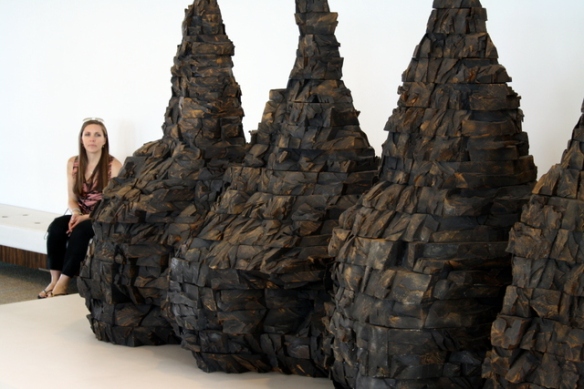 If you are visiting Austin, you can take a self-guided tour of The Mets’ sculptures. Just download the map available on http://www.landmakrs.utexas.edu. The site itself is a good read, full of information and easy to navigate.

Hopping back on the bus, we next headed to the Austin Museum of Art’s 12- acre Lake Austin location, Laguna Gloria which was built in 1916 as a private residence. There we played miniature golf on artist-designed putting greens. Art on the Green is a 9-hole outdoor phenomenon where all ages interact with nature and art. The set-ups were challenging, goofy and a blast, as you can see by one of us in action… 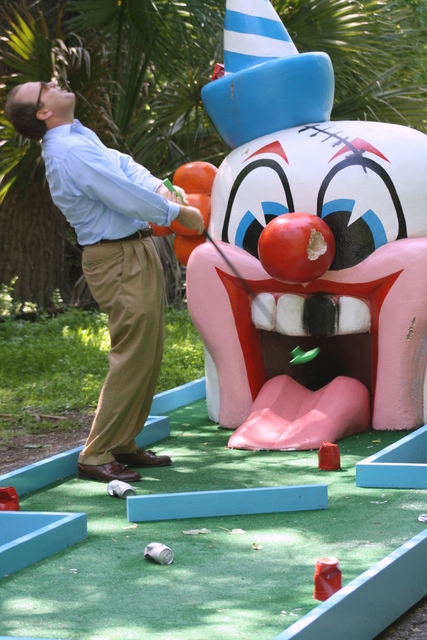 We visited the studio and home of artist, Ginger Henry Geyer who is represented by the Valley House Gallery in Dallas, stopped for lunch at Chez Zee (of course – food is a given at any Avant-Garde Society event), and then visited two private residences.

Below is the entrance to the second residence, designed by the San Antonio-based architects, Lake Flato who are famous for their Texas Vernacular Style.

The couple who lives here has been cited in ARTnews’ “Top 200 Collectors” international list. Naturally, the works we saw were first class as was the couple who were so gracious, warm and welcoming.

This was the last stop of the day – a peaceful waterfront peninsula. 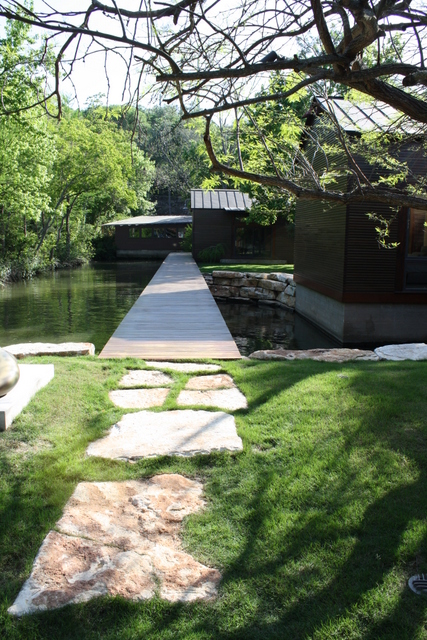 Many thanks for the fantastic organization of this day trip go to Maribeth Messino Peters and Scott Potter who Co-Chaired this year’s Travel Committee.

No matter which city is selected for the 2013 trip, I’ll go and recommend anyone who enjoys this sort of adventure also join me and the Avant-Garde Society. http://www.nashersculpturecenter.org/Membership/Avant-Garde-Society