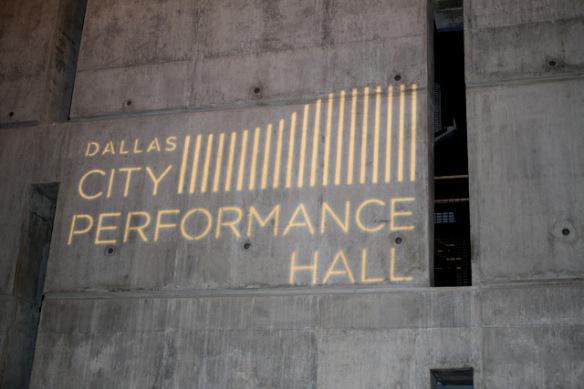 Projections on the walls in the lobby entrance of the DCPH logo.
The logo reflects the building’s roofline which resembles an undulating wave.
(photo: Meg Fitzpatrick)

Another architectural gem opened in the Dallas Arts District.  The gem is the Dallas City Performance Hall (DCPH). A ribbon cutting ceremony on Friday morning began a weekend-long celebration with 40 events. The concept for the new building was to provide first-rate space in the Arts District to mid-size and emerging performing arts groups who do not own their own facility. This need exists across multiple disciplines – a stage for dance, theater, music or chorale performances, as well as lectures and special events.

On Friday evening, we had the opportunity to hear individuals from the brain trust who joined forces and produced a thoughtful, high quality entry into the Arts District. Here are the professionals on the panel:

From the panel, we learned that 70 arts organizations were interviewed to understand their specific requirements. From this feedback, the team collaborated with the City of Dallas and each other to accommodate multiple, sometimes conflicting, performing arts needs.  I observed that the panelist, who have worked together since 2004 on this project, genuinely respect and like each other.

The result is a 750 seat hall – 550 on the lower level and 200 in mezzanine. It’s proof that on a tight, 100% publicly funded budget of $40.5 million an exquisitely designed and engineered structure can be built.

When discussing the unique requirements of the DCPH, Mr. Breslau said that the design was inspired by his admiration of Renzo Piano’s Nasher Sculpture Center (down the street on Flora) and his mentor Louis Kahn’s Kimball Museum in Fort Worth. What he adopted was the layout of a series of linear pavilions. Eventually the DCPH will have three side-by-side rectangles with waving ribbon rooflines. Interaction with the urban setting, said Mr. Breslau, was the reason there is a front two-story glass lobby and minimal setback from Flora Street.  “We wanted a city or village for the arts. The patron in the glass lobby becomes one of the actors on stage.” 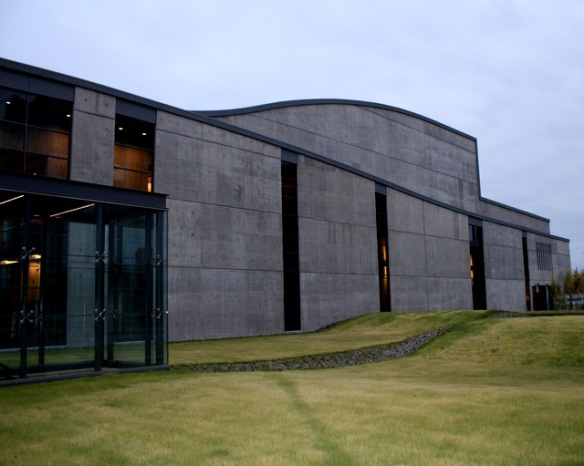 Phase One of Dallas Center for Performing Arts (DCPH) – west side profile.
60,000 sf on 100,000 sf site where two more pavilions will flank this one, completing the DCPH performing arts campus.
(photo: Meg Fitzpatrick)

Acoustician Mr. Holden shared with us the complexity of addressing the varying sound types, e.g. amplified and acoustic vibrations, inside the hall.  While outside and overhead, the flight path from Love Field had to go unnoticed to the audiences. He said that “out of necessity, this was most flexible hall his firm has designed.” When you enter, notice the cast-in-place concrete walls with the random patterns of “boards simulating wood.” The textured pattern was an intentional part of the sound reverberation calculations. Also, notice the walls and where the acoustic panels, which resemble “roman shades,” have been lowered or raised. To manipulate sound, 13 double-baffled wool panels can be mechanically and individually adjusted (see photos below). 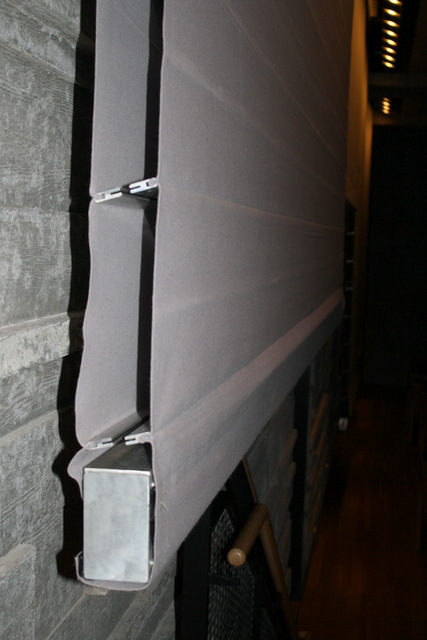 In a blog post last year, I highlighted work by the local artist Shane Pennington. Much to my delight he is the first artist commissioned by the Dallas Office of Cultural Affairs to make public art for the DCPH. Specifically, he was asked to make a digital painting for the theater’s stage curtain.

Staying true to his reputation as imaginative, technically savvy and out-of-the-box, his piece titled, Points of Life, is very cool (see image below). The medium is a programmable LED curtain – an electronic 57’ long grid made of 8” x 8” squares. Each square is like a colored pixel. All squares converge optically into animated images of walking figures. It’s comparable to the way Chuck Close paints his portraits, and how we experience and see his images.

In an interview with Peter Simek for D Magazine, Pennington talks about his summer in Berlin and being inspired by people watching in the city’s central plaza, Alexanderplatz:

“I filmed about four hours of material, and brought it back to the states. Then I went through it and hand-selected each character. As you can imagine, there are probably thousands of people really walking through this landscape, so I hand-selected each one. There are over ten thousand images that I had to go through. Each frame of every person had to be cut out and inserted.

Sitting in the plaza, obviously there are certain differences, like their (sic: Germans’) little hot dog stands, but if you really sat back and took the time to just absorb it and just watch life, it is fairly in a beautiful message. We’re all similar. It transcends boundaries and countries and all that stuff. In a sense, that’s kind of the beautiful message of this (sic: Points of Life).

“Dropped ceiling” is part of the acoustics and design which gives space for materials to muffle any overhead sound.
(photo: Meg Fitzpatrick)

Proof in the pudding (or actually hearing a performance):

I experienced the first live performance on Friday night which featured Sarah Jaffe, a soulful 20-year old North Texan singer and songwriter. I intentionally sat in the mezzanine, unexpectedly and happily surrounded by Jaffe’s fans. The sound was incredible – clear. My view from Row 11, Seat 11 – fantastic. The seat, covered with acoustically correct fabric – comfortable.

As a nice prelude to her performance, the warm-up band came from Dallas’ Arts Magnet school, conveniently located right across the street. Seven students from Booker T. Washington High School for the Visual and Performing Arts, joined on stage by Jaffe, sang delicate acoustic tunes.

As far back as the 1990’s, the DCPH was conceived as part of the grand plan for the Dallas Arts District – a special place for emerging and mid-size performing arts organizations. The opening this weekend was a big success for the Office of Cultural Affairs – a division of City of Dallas. Kudos to OCA for staying true to its mission: “Establish a cultural system that ensures all Dallas citizens and visitors have an opportunity to experience the finest in arts and culture.”

Be back next Sunday with more on art.